Perhaps the most beautiful and exciting gift in life is to guard a precious treasure and to further enoble it. The Gerbeaud is surely one of the most famous gastronomic assets of Hungary. It is a nice gift, but it is also a serious responsibility and a big challenge to manage such a business - while preserving traditions, constantly being renewed. The Gerbeaud legend began with Kugler Henrik in 1858.

Kugler opens his café-confectionery on 14th October on what is now József nádor Square.

Henrik Kugler moves his business to Vörömarty Square. His frothy coffee with chocolate, special liqueurs and candies attracted Pest’s audience. The Kugler tortes and mignons were not only well-loved, but could be wrapped on a paper tray to take-away, an innovation of Kugler’s.

As Henrik Kugler did not have any descendants to inherit the business, he asked a Genevan confectioner Finaz, to offer him a talented and young professional. Émile Gerbeaud’s name was proposed.

Henrik Kugler met Émile Gerbeaud for the first time in Paris and invited him a year later to Budapest in order to make him his business partner.

Gerbeaud’s extraordinary talent and his enterprising spirit gave the business added impetus, and accounted for the unique success story of Gerbeaud‘s. He took on a great number of new employees in both sales and service.

Émile Gerbeaud was the one who introduced to the hungarian market the cat’s tongue chocolate and the cognac cherry bonbon. The name Gerbeaud became internationally well-known and celebrated.

The Gerbeaud Pavillon opens as a restaurant. The Royal Pavillon was built for the Millenium celebrations in the City Park as a royal resthouse for the Hungarian king and Austrian emperor Franz Joseph I. and his wife Queen Elisabeth (Sissi).

Émile Gerbeaud receives the golden medal of the National Industrial Association. At the 1898 World Fair in Brussels and the 1900 Paris Exposition, he was invited to be a member of the jury, and was awarded the French Legion of Honour. Gerbeaud’s lucky star continued to shine ever wider and brighter.

Although Émile Gerbeaud survived the difficult war years, he died on 8th November, 1919. His wife Esther Ramseyer took an active part in the management of the business until 1940, maintaining its high standards.

After the secularization the Café name changed into Vörösmarty, but since 1984 the name Gerbeaud has shined again above the entrance.

Erwin Müller, a German businessman, buys the 4-storey Gerbeaud building. Gerbeaud Gasztronómia Ltd. takes over the management of the Gerbeaud House in the spirit of tradition and innovation. We believe it is our task to introduce new flavours and textures to those who are enthusiastic about gourmet foods, and to assist them in their discovery of good, quality products.

We introduce our new brand image and our new cake selection, whose illustrious representatives are the Royal Chocolate and the Salty-peanut-apricot.

Our owners - Katalin Pintér and daughter, Anna Niszkács - travel to the Cacao Barry chocolate lab in France to make the Or Noir 1858 dark chocolate - 71,9% minimum of cocoa – in collaboration with the masters there.

On the occasion of our 160th birthday the Gerbeaud160 cake was born, using the Cacao Barry Or Noir dark chocolate, developed exclusively for Gerbeaud Café. Following our traditions, we used classic Hungarian ingredients as walnut and apricot, but we made our jubilee cake in the spirit of innovation.

In Gerbeaud Café – faithfully to our founder, Émile Gerbead’s innovation – , our guests can taste classic coffee house courses beyond sliced cakes and packaged sweets. Gerbeaud as once, today is still one of the biggest and most prominent confectioneries and cafés in Europe.

We happily announce the launch of our brand-new PETIT GERBEAUD webshop.
Whether it’s a cake, a macaron or a bottle of wine, we bring your favorites to you home every day of the week in Budapest.
Cakes are available for 690 HUF in the usual quality.
See you soon at PETIT GERBEAUD! 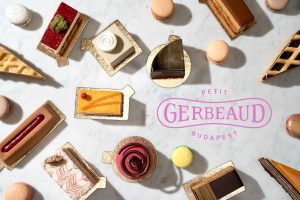